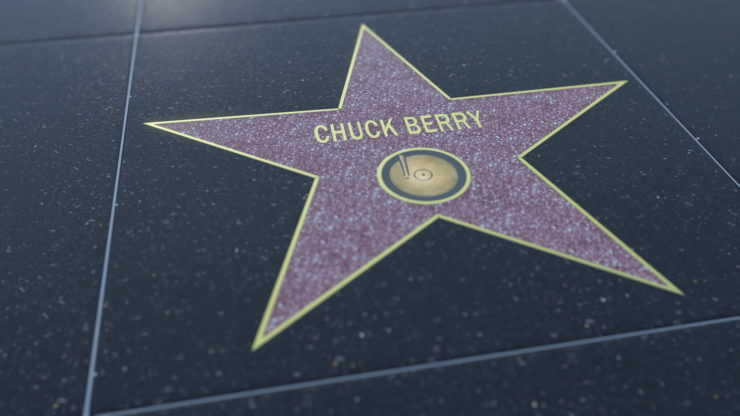 As soon as Extraterrestrials would discover the Golden Record sent through Voyager spacecraft, they would probably ask us to send more Chuck Berry.
He is dead now, but he lived long and his music will stay as long as music is on earth. He was one of the pioneers of rock and roll. Rock and roll originated and evolved in the United States of America in late 40s and early 50s, Chuck Berry was one of the few artists that imprinted early in the rock and roll industry. With songs like Maybellene, Roll Over Beethoven, Johnny B. Goode, Rock ‘n’ Roll Music and so on. Always delivering great music, that’s what his legacy was about. In Maybellene he showed what a great melodist he is, you cannot listen to that song and not move your body, your legs at least, I mean no matter how tired, stressed you may be, you just have to feel his vibe. He may really be the King of rock’n’roll. His story telling prowess was evident in Johnny B. Goode, with its country flow and guitar work, that song is a classic. No wonder why he was one of the first class of musicians to be inducted into the rock and roll hall of fame. All we can now enjoy is his works and hope to get an artist like him, the legacy he left behind is one to behold. ‘Long Live Rock and Roll’ he says, he was a great musician. Although his life as a law abiding citizen had its ups and downs, as early as high school he had already been convicted of a crime.
His songs have been used in several movies, he has been listed in a lot of best in the world lists, six of his songs were listed in the Rolling Stone’s 500 Greatest Songs of All Time. Among the many honours Berry received was the Grammy Lifetime Achievement Award in 1984 and the Kennedy Center Honours in 2000. He’s probably the most influential artist in the history of Rock’n’Roll. His music has been covered by many great artists and corporations. Elvis Presley covered ‘Too Much Monkey Business’, Jimi Hendrix covered ‘Johnny B. Goode’, The Beatles covered ‘Rock And Roll Music’, ‘Roll Over Beethoven’, ‘Memphis, Tennessee’ to name a few, The Rolling Stones covered ‘Come On’, ‘Let It Rock’ to name a few. He was a great guitarist, had a distinctive swagger about himself and his songwriting prowess was second to none.
During his lifetime, he recorded 20 studio albums, 11 live albums, total of 45 singles, 2 soundtrack album. He released his first album in May 1957, called it After School Session and for the next four years released an album for each year. His music has been used in a lot of movies, in Strictly Come Dancing ‘Johnny B. Goode’ was used, Pulp Fiction featured ‘You Never Can Tell’, the animated movie ‘Cars’ used Berry’s ‘Route 66’, Married… With Children featured ‘No Particular Place To Go’, Back to the future also featured ‘Johnny B. Goode. He was one hell of an artist, one like no other.