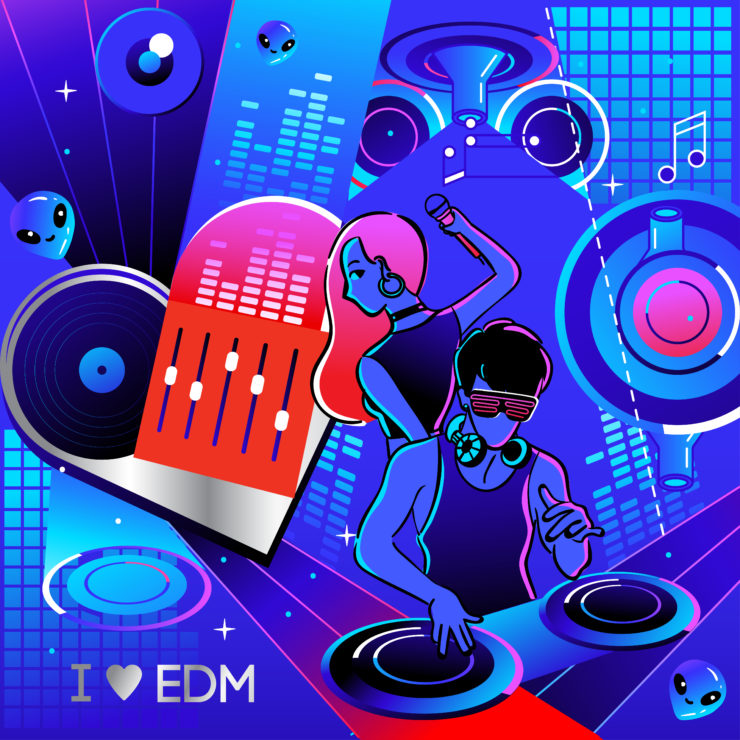 It’s an adrenaline-pumping sound many of us know and love. Cutting saw-synths, fast drum and bass beats, fragmented vocal samples and popping, plucking, waving and sweeping chords. Electronic Dance Music, or EDM as it is more commonly known, has taken up the world of music by storm since the 2010s. Young people of all backgrounds have enjoyed EDM, in all its various forms, for more than a decade. It encompasses so many different subcultures because it is made up of numerous, very different subgenres that each have their own attractive features. There have been attempts to form a more specific brand around the name EDM, but it continues to be used as an umbrella term encompassing many unique genres such as dubstep, house, techno, trance and others.

In the early 1980s, following the decline of disco music, a genre of music emerged from a hybridisation of pop, funk and boogie. It was called electro, and it was defined by its distinctive use of the Roland TR-808 drum machine, synthesizers and a much stronger focus on the instrumentation than earlier electronic genres – with much more sparse sprinkling of vocals – almost always distorted by vocoding or talkboxes. Electro paved the way for the technique of sampling – taking sounds from other songs and repeatedly using them in an original track – to be used in mainstream music.

Around the time electro became mainstream, other genres started to emerge. House music in the early 1980s with a sound inspired by reggae and pop, techno and rave in the mid-80s with fast-paced and hypnotic rhythms, and acid house in the late-80s. They fueled the subculture of all night after-parties or raves as the name by which they are now known. As raving gained popularity in the UK, trance music – with its irregular vocal structure, and a melodic and hypnotic sound – started to develop from a combination of techno and house in the 1990s. This, and other genres with more of an emphasis on deep, sub-bass sounds and fast drum beats such as jungle music, drum and bass and breakbeat, laid down the foundations for one of the most popular genres of EDM today: Dubstep.

The sounds of dubstep, bass music, electro house, trap music and numerous microgenres make up the bulk of EDM today. It is most commonly listened to by young people – those of the millenial and Gen Z generations – but it is also one of the most accessible kinds of music, and a genre within which that many budding young musicians participate in creating their own tracks. Millions of listeners enjoy EDM through media sharing platforms such as YouTube, Spotify and Soundcloud, where they are able to find both the creations of professional artists and newbie music creators.

It’s a highly influential genre that has its reach toward many subcultures that the young people of the 21st century ascribe to. EDM is a vehicle for inclusion – its subgenres originate from diverse racial backgrounds, are irrespective of class, and appeal to people of all colours and intensities of interest in music.